Skip to content
Previous Post: Sloth Brain – Let’s Take A Look At What’s Inside Next Post: Where Do Sloths Originate From? Let’s Take A Trip Back In Time 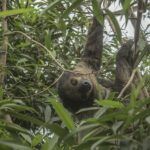 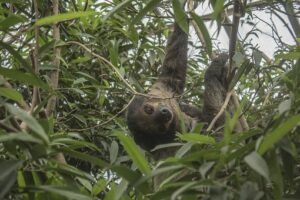 Sloths are so many things. They are gentle. They are lovable. They are adorable. They are very, very, very slow! But are sloths friendly? After all, as wonderful as sloths are, they are still wild animals. Well, we are going to attempt to find out the answer to this question as that is what this article is going to be about.

I will work towards arriving at our answer in the following manner: first, I will talk a bit about the personality of a sloth and how they are amongst themselves; then, I will discuss how sloths behave around humans; after that, I will discuss how sloths get along with other animals; and finally, I will present a list of some of the friendliest animals out there. By the time we have finished our time together here, I hope to have informed you and entertained you. So, let’s begin…..

The Personality Of A Sloth

As mentioned earlier, sloths are a number of things: gentle, lovable, adorable, and wonderful being a few of those things. As far as some other personality traits go, here are a few bits of information for you:

So, for the most part, sloths seem to be relatively friendly towards each other (unless it is mating time….. then the claws come out!).

Are Sloths Friendly Toward Humans? 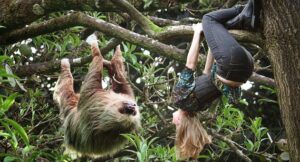 Generally speaking, sloths are not dangerous when they are around humans. However, that does not necessarily mean that they are friendly toward humans, either. The Sloth Conservation Foundation states that “They are also a solitary species that lives alone in the wild. That means that they do not like to be petted, groomed or bathed because these are not natural behaviours for them.”

It is important to keep in mind that sloths are wild animals and with that come certain instincts. If they feel threatened or feel that they are in danger, they will take actions to defend themselves. One of those actions is by using their claws as a defense mechanism. These claws are long, they are curved, they are sharp, and they are strong!

When humans touch or hold sloths, the sloth may become disoriented and do something unexpected, like bite you or swipe those claws at you. Another important consideration is the fact that sloths have terrible eyesight, which makes things that much more difficult for them and as a result, that much more unpredictable for humans that are close to them.

For more information about this, check out my article titled, “Are Sloths Dangerous? Is This Even Possible?“.

Do Sloths Get Along With Other Animals?

Sloths are the slowest-moving mammal (and one of the slowest-moving animals) on the entire planet. As such, they are not aggressive predators. Additionally, they prefer to live a solitary existence, hanging upside down from the trees for most of their lives.

However, sloths do have various critters living on them such as beetles, cockroaches, fungi, parasites, and algae. An incredible relationship exists between sloths and this algae, which can be briefly described as follows:

For more information about this mutually beneficial arrangement between sloths and algae, check out my article titled, “Sloth And Algae Symbiotic Relationship – What Is This About?“.

In no particular order (other than alphabetic), this is a list of some of the friendliest animals that my research uncovered for me: 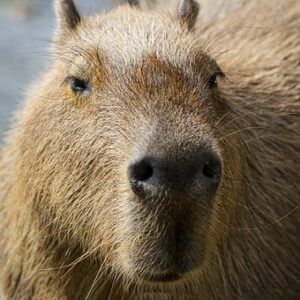 Before doing my research for this article, I had never heard of this particular animal. However, I am so glad that I know about it now. This rather large rodent (okay, there is not a larger rodent on the planet than the capybara!) is found in Central and South America and is related to the cavy and the guinea pig. According to A-Z Animals, “One of the very few things in this world on which everyone can agree is that capybaras are the friendliest wild animals on Earth.” 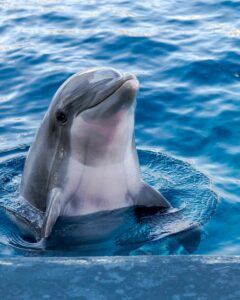 In addition to being very smart, dolphins are also very friendly. According to ValueWalk, “These aquatic mammals are extremely playful around other creatures including humans. Dolphins not only have a friendly behavior but also advanced social skills. They are also harmless in nature.” 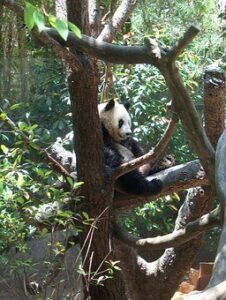 The giant panda is a friendly giant and is described by World Wildlife Fund as follows: “The panda, with its distinctive black and white coat, is adored by the world and considered a national treasure in China. This bear also has a special significance for WWF because it has been our logo since our founding in 1961.” 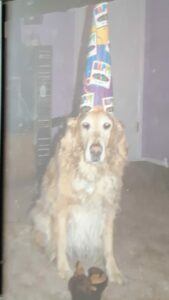 I was so blessed to have had a Golden Retriever as a family dog in my younger years. I can speak from firsthand experience that “Spencer” was such a friendly dog and such a wonderful pet to have.

So, are sloths friendly? That was the question that I attempted to answer in this article and I did so by talking a bit about the personality of a sloth and how they are amongst themselves, by discussing how sloths behave around humans, and by discussing how sloths get along with other animals. I also presented a list of some of the friendliest animals out there.

For the most part, sloths do indeed seem to be friendly animals. Having said that, they are still wild animals and have instincts associated with that. Overall, though, sloths are gentle, friendly, wonderful animals.

I hope that you enjoyed reading this article. If you have any comments or questions, please feel free to leave them below. Also, if you have any thoughts regarding friendly animals in addition to the ones that I have listed, I would love to see that!