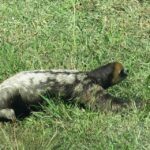 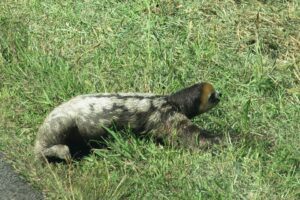 Even though my website is All About Sloths, I love all animals and do sometimes write about animals other than sloths. This is one such article, which is going to present some animal rescue stories (including some sloth rescue stories…..of course!), as well as some stories about animals rescuing other animals, plus an amazing story about an animal rescuing a human. At the end of it all, I hope to have brightened your day (even if just a little bit) since sloths (and all animals and all kind people) always brighten mine.

As the slowest-moving mammal (and one of the slowest-moving animals) on the planet, sloths can find themselves in a world of trouble if they end up in a dangerous situation. Some examples of dangerous situations that sloths can find themselves in are trying to cross a busy highway (well, trying to cross any road is quite the challenge for them), climbing on a telephone pole, and trying to stay alive while on a sandy beach. Fortunately, there are some kind individuals that are willing to help these wonderful creatures out, some of which I will talk about next.

—>Sloth rescue story near Uvita, Costa Rica. Posted on October 7, 2016 by Happy Coconuts Travel Blog, this video shows a kind soul helping a sloth trying to cross a road in Costa Rica. I love to see kindness in the world, and this is one great example of that.

—>Sloth rescue story from Ecuador. Posted on January 26, 2016, by WTNH News8, this video shows transit police from the Ecuadorian Transit Authority rescuing a sloth from the highway. I’m guessing this isn’t part of their regular job duties!

—>Sloth rescue story near Parque Nacional Manuel Antonio (Manuel Antonio National Park) in Costa Rica. Posted on September 7, 2017 by Rumble Viral, this video shows a sloth on a telephone pole being rescued by firefighters. Once again, I’m guessing that this is not part of a regular job duty of a firefighter.

—>Baby sloth rescue story from Costa Rica, on Osa Peninsula beach. Posted on January 25, 2018 by USA TODAY, this video shows a wonderful human being helping a baby sloth that was in great need of assistance on a sandy beach. Another example of human kindness that I love to see!

In addition to the sloth rescue stories as presented in the previous paragraph, I would also like to talk about some other animal rescue stories. These seven stories were presented in a compilation in a June 2, 2016, post by ABC News and include the following:

The title that is used for this video is “7 Animal Rescue Stories That Will Restore Your Faith in Humanity”, which clearly shows that there are some kind, caring, wonderful people out there.

Humans are not the only ones that rescue animals – animals rescue animals, too. And that is what this video is about. It was posted on September 29, 2015 by The List Show TV and presents a compilation of the following rescues:

Animals are much smarter than so many people give them credit for, and these videos demonstrate just how smart animals are.

There are so many incredible stories about animals rescuing humans, so I thought I would highlight one of those stories next. Once again, I find it so amazing how smart animals are!

There Are Heroes Amongst Us

After presenting some happy animal rescue stories, it warms my heart to know that there are heroes amongst us (both human and animal heroes). I truly hope that this article brightened your day and warmed your heart, too.

Do you have a favorite rescue story from this article? Do you have other rescue stories that you’d like to share? If so, I would love to see them and read about them. Feel free to leave any comments below.