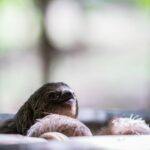 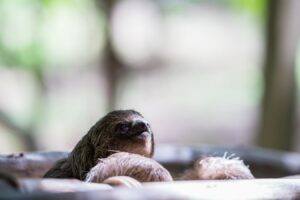 The adorable and lovable sloth can be found living in the rainforests of Central and South America, as well as in a number of zoos and rescue facilities. So many people have fallen in love with this wonderful creature (myself included) and I believe that the world is a better place with them being in it. I also believe that as humans, we can learn a thing or two from them about slowing down and enjoying life a little bit more. Have you ever wondered about the life span of a sloth? After all, they eat mostly leaves and are the slowest-moving mammal (and one of the slowest-moving animals) on the planet. How long can they survive living this kind of lifestyle?

In this article, I will investigate this further in an attempt to determine the life span of a sloth. I will do so by discussing the following:

Is Life Better In The Wild Or In Captivity? 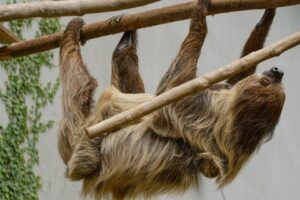 First and foremost, when speaking of life in captivity, I am not referring to having a sloth as a pet. This is a horrible idea for so many reasons. For more information regarding pet sloths, please see my article titled, “Can Sloths Be Pets? They Are So Cute, But…..“.

Even if sloths are well-cared for by professionals in captivity, they are still not in their natural habitats and being in captivity causes them stress. So, do sloths live longer in the wild or in captivity? After researching various sources and coming up with inconsistent information, it appears that no one has a conclusive answer to this question. The age of a wild sloth cannot be accurately determined and no one has ever tracked a wild sloth from their date of birth to their date of death to determine a life span. So, there are just not enough facts to come up with an answer.

According to The Sloth Conservation Foundation, “…Captive two-fingered (Choloepus) sloths are known to reach 40-50 years old, however sloths were not bred in captivity until 50 years ago and so there has been little chance for any individual to exceed this figure…..When we consider that sloths in captivity often have elevated stress levels, an excessively sedentary lifestyle and an unnatural diet that is overly high in fructose (diets in zoos typically consist of fruit and vegetables as they cannot source the new-growth tropical leaves that form the sloths natural diet), it seems likely that wild sloths may live longer in the wild than they do in captivity.”

What Ages Have Some Sloths Made It To?

While we do not know for certain how old sloths have lived to in their natural habitats, we do know how old some sloths in captivity have made it to. Here are some examples:

How Long Are Life Spans Of Other Mammals?

For comparison purposes, let’s take a look at the life spans of two other mammals:

Sloths face numerous threats to their survival, which means that they could have a substantially shorter life than what is possible for them. Some of these threats include deforestation, vehicle collisions, electrocutions, and actions by humans such as poaching and illegal trafficking. For more information about these threats, check out my article titled, “Are Sloths Endangered? The Sad Reality.” 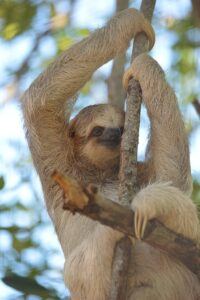 So, after doing some research and attempting to determine the life span of a sloth, I believe that I have achieved some success (at least with respect to how long some sloths have lived to in captivity). While it is not possible to ascertain a sloth’s life span in their natural habitat, it does appear that they live longer lives in the wild than they do in captivity. To me, this makes sense since they have evolved and adapted over millions of years, they are stressed in captivity, and they are most comfortable being in their natural habitat (which is the best place for them to be).

In this article, I also compared the life span of a sloth with that of a couple of other mammals. Furthermore, I talked a little bit about some of the threats that sloths face. Sloths are such wonderful creatures and it is my hope that we humans are able to appreciate them more, as well as to learn from them…..to learn to slow down…..to learn to relax…..to learn to enjoy life a little bit more.

Thank you for reading this article. I truly hope that you enjoyed it and learned something from it. If you have any comments or questions, please submit them below as I would love to hear your thoughts.