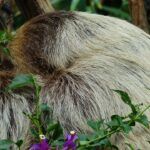 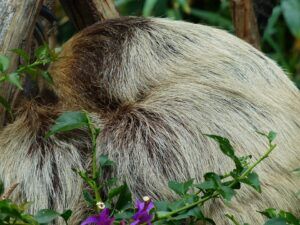 Throughout history, animals and humans have adapted in so many ways to so many situations. Sloths are no exception as these gentle, adorable and lovable creatures have had their own unique history of adapting. In this article, I will go into more detail about sloth adaptations as I discuss what sloths were like millions of years ago, how they have adapted over the years, and what they are like today. Let the adaptation journey begin!

What Exactly Does Adaptation Mean?

According to National Geographic, “Evolutionary adaptation, or simply adaptation, is the adjustment of organisms to their environment in order to improve their chances at survival in that environment.” So, it is all about survival…..about changing…..about evolving…..about adapting to environments. Those that are able to do so successfully are able to survive. And survive is something that sloths have been able to do for at least 35 million years.

How Have Sloths Adapted?

There are many ways in which sloths have adapted, and I will go into more detail about some of those ways. These are the specific sloth adaptations that I will discuss: 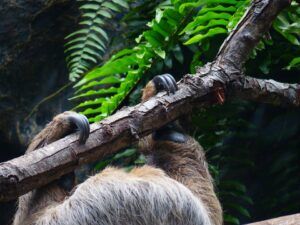 Sloths have claws that are long and curved, as well as sharp and strong. They also have long limbs which, when combined with the features of their claws, provide them with an ability to hold securely onto tree branches. These adaptations enable sloths to be nicely equipped for life in their natural habitat of trees and branches.

Sloths consume very few calories (they eat mostly leaves). They also have a four-part stomach that takes a long time to digest what they eat (it can take one leaf up to 30 days to be digested by a sloth’s stomach). They tend to stay close to home and will travel very limited distances (only about 120 feet per day in the trees). So, slow metabolism is another sloth adaptation that has occurred.

Sloths have adapted to be slow-moving creatures, but this certainly does not mean that they are lazy. Rather, it is about survival and adaptation for them. Their slow movement is done with purpose, with thought, is strategic, and is done intentionally. Consider these points:

Slowness of movement is quite the sloth adaptation. It is not about laziness for them, it is about survival. For more information about why sloths move slowly, check out my article titled, “Why Do Sloths Move Slowly? It’s About Survival“.

Slowness of movement, in addition to a uniqueness that sloths have regarding their fur, results in the existence of a great habitat on them for other creatures. Various critters (including algae) can be found living on sloths. With this arrangement, a mutually beneficial situation exists: the algae gets water and shelter, while the sloth receives camouflage. How’s that for an interesting adaptation?

Some sloths have extra neck vertebrae that not many other mammals have. With this extra vertebrae, these particular sloths are able to turn their heads 270 degrees, which can be extremely helpful in spotting predators and staying safe. Extra neck vertebrae – yet another sloth adaptation.

The 35 Million Year (Or Longer) Journey 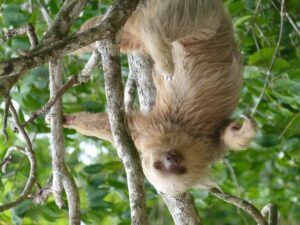 Thank you for reading this article. If you have any comments or questions, please feel free to provide them below. I look forward to your thoughts, comments, questions, and opinions and will be sure to reply.