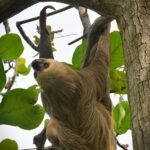 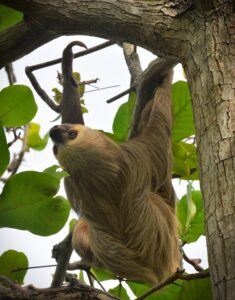 With so many sloth images, videos, memes, GIFs, products, etc., it seems like sloths are very popular these days. And for good reason: they are cute, adorable, lovable, gentle, wonderful creatures. As the owner of allaboutsloths.com, I write articles in an attempt to educate my readers about this incredible animal. In today’s article, I am going to focus on trying to answer the question, “Where are sloths found?”

I will do so by first discussing some sloth history, then going on to discuss some places where sloths can be found today. At the end of it all, I hope to have answered our question and provided some useful information along the way. So, let’s begin…..by going back…..

Where Did Sloths Come From?

Sloths of the past lived very different lives, had different features and characteristics, and lived in different places. The last ground sloth to go extinct was the Megalocnus rodens. This species of sloth could be seen roaming around Cuba around 4,200 years ago.

For more information about sloths of the past, check out these two articles: “Evolution Of Sloths – A Bit Of History” and “Sloth Adaptations – Such Amazing Animals!“.

Where Are Today’s Sloths?

Through evolution and adaptation, today’s sloths are the slowest-moving mammals (and one of the slowest-moving animals) on the planet. They are built for this slow-paced way of life and having survived at least 35 million years, they are obviously doing something right.

As far as where sloths are found, I am going to discuss three places in particular, which are the following: 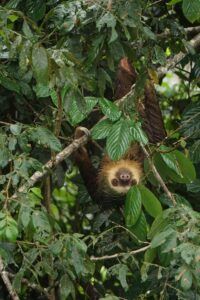 The sloth’s natural habitat consists of trees and branches, and by living in the rainforests of Central and South America, they are able to be in that natural habitat and feel right at home there. They spend most of their time high in the trees hanging upside-down.

Sloths have claws that are long, curved, sharp, and strong, as well as having long limbs, which is great for holding onto tree branches in a secure fashion. However, these claws make walking on land very difficult for them, so being up in the trees is the best (and safest) place for them to be.

There are six species of sloths today that live their own unique lifestyles and in their own specific locations. For more information about this, check out my article titled, “Where Do Sloths Live? Look Up…..Look Way Up!”

Feeling The Love In Zoos And In Rescue Centers

As previously stated, the best place for a sloth to be is in its natural habitat. According to The Sloth Conservation Foundation, “…it seems likely that wild sloths may live longer in the wild than they do in captivity”. This makes perfect sense to me as they are most comfortable being in their natural habitat, while they feel stressed in captivity. 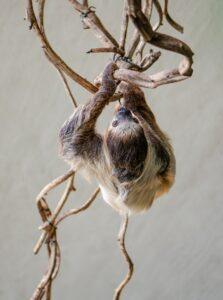 However, I do realize that things happen: sloths may be injured in the wild and need help, baby sloths may become orphaned, etc. Zoos and rescue centers that look after sloths and take good care of them get the utmost in respect and admiration from me. With kind, caring people working in zoos and in rescue centers, sloths can live long, healthy lives. While it is not possible to know with certainty how old sloths have lived to in their natural habitats, it is known how old some sloths in zoos have made it to. Here are some examples:

I totally get it…..sloths are cute, adorable, gentle, lovable…..who wouldn’t want a pet like that? However, even with the kindest, most caring, and most loving people as owners, it is still a terrible idea to have a sloth as a pet. I have written an article about this subject, which is titled “Can Sloths Be Pets? They Are So Cute, But…..” in which I go into detail about all the reasons why I am opposed to people having a pet sloth.

Some of the issues that I have with the idea of sloth pet ownership consist of habitat considerations, diet requirements, physical characteristics of sloths, and personality/lifestyle factors of sloths. There are more factors to consider beyond those that I have mentioned here, including what might be the most important consideration of all…..the fact that most pet sloths are initially snatched from their homes in the rainforests of Central and South America. This is done as part of illegal smuggling of wildlife and if there is a demand for pet sloths, then this cruel trafficking activity will continue.

The Good And The Bad 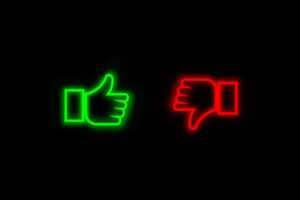 In this article, I attempted to answer the question, “Where are sloths found?” by discussing some sloth history, as well as some places where sloths can be found today. Because of all the features and characteristics that make a sloth a sloth, the best place for them to be is in their natural habitat of trees and branches, living in the rainforests of Central and South America.

With the right people providing the right care for them, sloths can live relatively long and healthy lives in zoos and in rescue centers. It is still not the best place for them, but it is certainly a much better place for them to be than in someone’s home as a pet (which is such a horrible idea).

I hope you enjoyed reading this article and that I provided you with some useful information in it. Please feel free to leave any comments or questions below and I will be sure to reply.