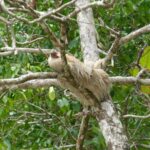 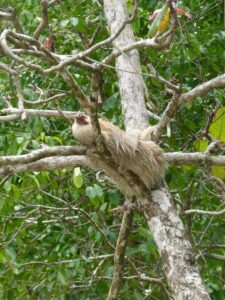 Have you ever thought to yourself, “Where do sloths live?” After all, there are not many animals on the planet that move slower than the sloth, and there is not a mammal on the planet that moves slower than the sloth. So, they can’t just live anywhere, as there would be far too many threats to their survival. Fortunately, it appears that sloths have this figured out, at least to a certain extent.

In another article, “Cool Sloth Facts – Learn About Them & Love Them”, I presented a general description of where sloths live (in the trees….way, way up in the trees). In today’s article, I will review some information from that previous article, and then go into more detail about where each of the six species of sloths live. At the end of it all, I hope to answer the question, “Where do sloths live?” 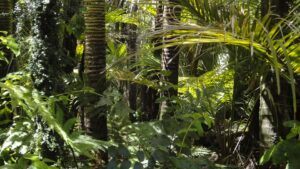 Living a slow-paced life way up in the trees, sloths are quite comfortable living in their treetop penthouse suites. They live in the rainforests of Central and South America and spend most of their time high in those trees. Having claws that are long, curved, sharp, and strong, as well as having long limbs, sloths are provided with an ability to hold securely onto tree branches. Trees and branches are part of their natural habitat, so they should feel right at home there. Having said that, each of the six species of sloths live their own unique lifestyles and in their own specific locations. I am going to go into more detail about this as this article progresses. But first, I would like to name the six species of sloths that exist.

The six species of sloths that will each have their habitats discussed in more detail are as follows:

Habitat Of Choloepus Hoffmanni (Hoffman’s Sloth) – Soaking Up The Sun

The Hoffman’s sloth lives in two populations in Central and South America, including in the following countries: Bolivia, Brazil, Colombia, Costa Rica, Ecuador, Honduras, Nicaragua, Panama, Peru, and Venezuela. They love being high in the rainforest trees and according to Animalia, they “…prefer trees with plentiful lianas and direct sunlight.”

Habitat Of Choloepus Didactylus (Linnaeus’s Sloth) – High In The Trees

The Linnaeus’s sloth lives in the following countries: Brazil, Colombia, Ecuador, Guyana, Peru, Suriname, and Venezuela. According to Animalia, “The preferred habitat of this species is high canopy of the tropical rain forest. Home range of each individual is usually about 10 acres.” 10 acres may not seem very far, but when you’re talking about sloths, I imagine that range could be rather large for some of them.

Habitat Of Bradypus Variegatus (Brown-Throated Sloth) – In Many Places

The Brown-throated sloth spreads itself out quite widely, as it lives in the following countries: Argentina, Bolivia, Brazil, Colombia, Costa Rica, Ecuador, Honduras, Nicaragua, Panama, Peru, and Venezuela. These sloths can be found in various forests, and even in swamps. There are some places where Brown-throated and Hoffman’s sloths live in the same areas. 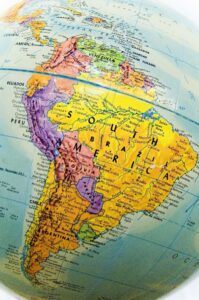 The Maned sloth lives in Brazil and according to The Sloth Conservation Foundation, “These elusive creatures now only exist in a tiny strip of Atlantic forest on the coast of Brazil and are currently listed as vulnerable…” The home range of this particular sloth species can be almost 15 acres, which, in sloth mode, may seem considerably more than the 10 acre home range of the Linnaeus’s sloth.

The Pale-throated sloth prefers to lead a solitary existence, hardly ever leaving the trees. These sloths live in Brazil, Colombia, French Guiana, Guyana, Suriname, and Venezuela.

According to The Sloth Conservation Foundation, “Pygmy sloths are found exclusively on the tiny and remote Isla Escudo de Veraguas in Panama and were only identified as a new species in 2001. They are thought to be approximately 40% smaller than their mainland counterparts and although the population size remains unknown, these little sloths are considered to be one of the most critically endangered mammals in the world.” This island, which is only about 4.3 square kilometers, does not leave the pygmy sloths much of a home range to work with.

Living In The Trees

In this article, I attempted to answer the question, “Where do sloths live?” I named the six species of sloths that exist, I discussed the habitats of all six species, and I presented a bit of additional information about some of them. Living in the rainforests, sloths can be found in many areas of Central and South America. Some move around a bit more than others (when they do move, they do so very slowly…..after all, they are sloths!).

While there are some differences and uniquenesses to each species of sloth, there are also many similarities between them, as well. All sloths are built for a slow-paced life way up in the trees, but this does come with threats to their survival. One huge threat to sloths is deforestation. As these trees get cut down, the sloths lose their homes as well as their source of food. Actions by humans such as poaching and illegal trafficking pose additional threats to sloths. These are just some of the threats faced by sloths every day. While all sloths are threatened, the Maned sloth is listed as vulnerable, and the Pygmy sloth is critically endangered.

One final similarity between sloths that I would like to point out is the fact that they are all gentle, lovable, adorable, wonderful creatures. I hope you agree with me on this and I also hope that you enjoyed reading this article. If you have any comments or questions, please feel free to submit them below.