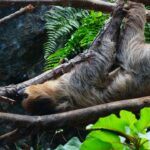 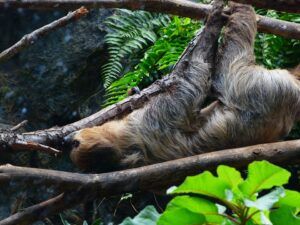 In today’s fast-paced world, speed seems to be so important to so many people. We have fast cars, fast computers, fast cell phones, fast internet connections, fast planes, fast trains, fast food… I could go on and on for awhile here. As if things aren’t already fast enough, more work is being done to make the world even faster. And then we have sloths… quite the opposite! They do almost everything in their lives at a slow, slow, slow pace. Why is this? Why do sloths move slowly?

In this article, I will attempt to answer this question by going into more detail as I discuss how slowly sloths actually move, and then talk about why they move slowly. It has nothing to do with laziness and everything to do with evolution and survival.

How Slowly Do Sloths Move?

Why Do Sloths Move Slowly?

There are a number of reasons why sloths move slowly, some of which include the following:

Living Off Of The Trees 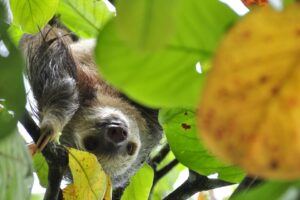 Sloths consume very few calories (they eat mostly leaves), they have correspondingly slow metabolisms, and they have a four-part stomach that takes a long time to digest what they eat. It can take one leaf up to 30 days to be digested by a sloth’s stomach. Eating mostly leaves cannot provide much energy or nutrients for sloths, so moving slowly saves some of that energy for them and they can survive even if they have eaten a little bit of food. They tend to stay close to home, too and will only travel about 120 feet per day in the trees. If I lived on mostly leaves, I wouldn’t have much energy, either!

Living In The Rainforests And Staying Warm

Sloths live in the rainforests of Central and South America, which is a hot and humid part of the world. As such, sloths don’t have to worry about using up a bunch of energy to keep themselves, their cardiovascular system, and their muscles warm – they’re already warm in those rainforests. If their evolutionary journey had taken sloths to a different habitat, it is possible that they would not be as slow-moving as they are today.

The sloths that we know today are adorable, lovable, gentle tree-dwelling creatures. At one time in their evolutionary process, however, sloths were giants that walked on the ground and stood on their back limbs to reach up into trees for leaves. According to Camila Mazzoni of the Leibniz Institute for Zoo and Wildlife Research in Germany, “What changed was a combination of both going up into the trees, and having a diet almost entirely based on leaves.”

Survival Of The Slowest

Sloths have terrible eyesight and moving quickly is not an option for them because of this issue. As a result, they must travel slowly so that they make it safely from point A to point B, which is almost always in trees. They also don’t have to worry too much about predators if they are high up in the trees, moving slowly (or staying motionless), and camouflaged – jaguars, ocelots, and harpy eagles (their three main predators) hunt prey visually and sloths probably move so slowly that they don’t get noticed. How smart is that – under the radar by being silent and cautious. Without being at huge risk from predators, sloths can also save energy by remaining quiet, still, and calm in the trees.

As Aesop Said, “Slow And Steady Wins The Race” 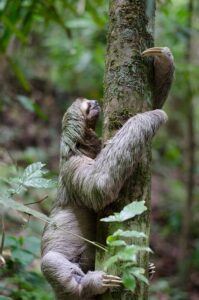 Sloths have been on this planet for approximately 35 to 40 million years, so they must be doing something right. Their way of life is not one of laziness – rather, they are survivors, they are strategic, and they are able to efficiently conserve energy. They move slowly intentionally, with purpose, and for a number of reasons, some of which were discussed in this article. Low caloric intake and slow metabolism make saving energy important, which sloths do by moving slowly. The hot and humid habitat that sloths live in allows them to save energy that would otherwise be expelled in an attempt to keep warm. Evolving from ground dwellers to tree-dwellers has slowed the sloth down over the years. Finally, moving slowly is a way for sloths to stay safe while travelling, as well as to stay safe from predators.

It must be quite the balancing act for sloths to receive such a small amount of energy and efficiently use that energy as needed. It seems like they have a great system in place that has allowed them to survive for a very long time on this planet. Maybe, just maybe, we could all learn something from sloths about slowing down and enjoying life more. After all (in my humble opinion), life should not be a race, or a competition, or hurrying from one place to another on a regular basis. I believe that it should be more about slowing down and enjoying ourselves, even if it is just a little bit. Maybe being just a little bit more like the sloth. Thank you for reading and if you have anything that you’d like to share, I would love to see it and read about it.